‘A Lost Lido and an Accidental Time-Slip’ was written for the event: PechaKucha Leamington Spa Vol.9 Online. This special virtual edition of PechaKucha raised £1,160 in donations towards making scrubs for NHS and health workers.

When read live, the story lasts for 6minutes and 40seconds and is timed to coincide with 20x accompanying slides (each displayed for 20 seconds). 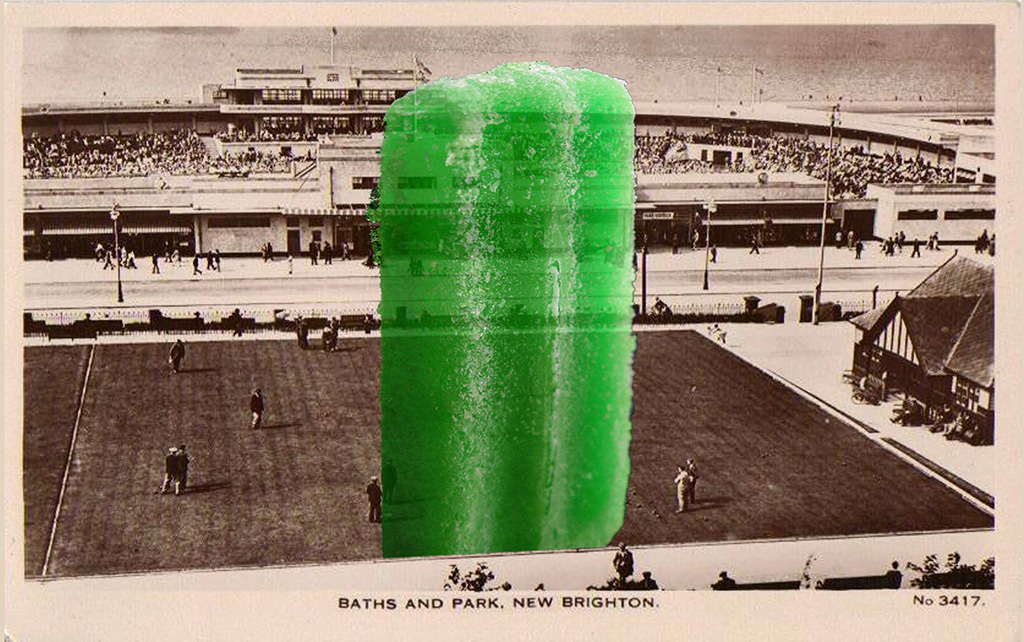 I have swum in many interesting waters — from the deep inlet of Dublin Bay’s Forty Foot; to Keflavik’s warm, sulphurous Blue Lagoon; from a Firth of Forth loony dook; to the seaweed-strewn tidal lido in Granville, Normandy; And Woolton Baths where John Lennon & Paul McCartney once swam… But I never did get to experience Britain’s largest aquatic stadium — New Brighton’s Art Deco Open Air Pool.

Opened in 1934 by Lord Leverhulme, for 56 years it occupied the corner of the Wirral Peninsular where the Irish Sea meets the River Mersey. If you could still climb the pool’s five tier diving board today, it would offer views of Liverpool’s 8 giant red shipping cranes and — with a bit of squinting — Antony Gormley’s 100 iron men over on Crosby Beach.

Alas, the lido was badly damaged by a storm in 1990 when the Mersey burst its banks. As a seaside resort, New Brighton had already had its day. The tower, the ballroom, the pier were all long-gone. Martin Parr’s famous 1986 photo series was titled ‘The Last Resort’. The area might make a come-back, but this is where the Baths would leave the picture.

For the next two decades, the site would remain a grassy wasteland, until the redevelopment of Marine Point which brought with it a Morrisons supermarket, The Light cinema, a Travelodge and a pedestrianised stretch of restaurants arcing around one end of the Marine Lake. This ‘New’ New Brighton is the place that I moved to a few years ago, and the only version of the place I’ve ever really known.

I often try to picture what went where in Old New Brighton. The Trocadero Cinema and the Tivoli Theatre, both now replaced by red brick housing. The Art Deco arcades cling on but not for much longer. When I walk down the freezer aisle of Morrisons, I wonder if any of the frozen desserts line up with where ice creams might have once been held aloft by children in the lido. A Lager and Lime ghost ice lolly hovering over this box of Almond Magnums. Do any of the Travelodge beds point in the same direction as sun-loungers once did around the pool? Would pairs of eyes in any of The Light’s 8 cinema screens be looking at where the Miss New Brighton contest was once held?

Black and white pictures in the Magazine pub and Remember When Cafe help me piece places together. As do laminated newspaper articles on blue pin-boards in the heritage centre at the back of St James’ Church, open Saturdays 11 ’til 1. But the shots are usually from the same angle — the best vantage-point. No-one thought to document the less photogenic views, the bland walls and the plain streets; the joining-up shots.

New Brighton is enjoying a bit of a renaissance at the moment — colourful murals are being painted above Victoria Road’s shop fronts and on the gable ends of nearby terraced houses. A closed-down pub on a hidden corner becomes a tromp l’oeil of a bright green heritage tram. And it was the arrival of these frescos that had me trying to remember what the original walls looked like — how quickly I’d forgotten. So I took a tour of my neighbourhood with the little orange avatar in Google Street View.

Sure enough, the last time a Google Street View car had done a circuit of these streets was a couple of years ago and here were some of the bland walls and plain streets circa 2018. I went for more of a wander, dragging and dropping my little orange man. A builder takes a cigarette break outside the house he’s long-since sold; a jogger in red and white stripes co-ordinates with the shipping cranes; and one of the painted Mermaid sculptures has her face auto-blurred to protect her identity.

And then something happens. I head down the hill with my orange avatar, towards the roundabout and Marine Point and the Morrisons. The Bella Italia glitches and becomes Brooklyn’s Café, captured July 2012. I click closer to the roundabout, step closer to the arc of restaurants and then Whoosh. I have slipped back in time. There is no Morrisons here. No Travelodge or cinema. Even Brooklyn’s has now disappeared completely. I slowly move around to face where the supermarket should be and I find myself looking at a grassy wasteland. Captured October 2008. An expanse of sunken grass where the world’s biggest lido used to sit. Beyond the unkempt dips I see the twin tower blocks of The Cliff in the distance. I turn to face Marino Lounge and Prezzo but the restaurants have all gone and I’m staring across the Marine Lake.

I’m not standing by glassy mixed-retail units, I’m standing on pot-holed grey tarmac. A stretch of road that existed when Google Street Cars first took a drive around Britain in the late noughties, but that’s been pedestrianised since 2011. I edge back towards the roundabout and I’m met with a glass screen. The kind that Google Street View presents when you reach a dead end. I’m trapped in the past! The only way out is around the back and along the prom. A glitch of a goods entrance; the boxy complex pops up and I’m back in the present, or near enough.

There must be more of these asphalt slips in time, where old through-roads divert. The time slips won’t last forever — nothing does — but while they do, we can explore places that we missed first time round, sharing Lager and Lime ghost ice lollies with our orange avatars as we go.