Between February 2012 and July 2018, I worked in Manchester and commuted by train from Liverpool. I always took a backwards-facing window seat so that the scenery would pass by more slowly and, at a particular point between Widnes and Warrington, I would line up my camera phone with the farm road that leads to the eight concrete cooling towers of Fiddlers Ferry.

I took this shot every weekday for six and a half years. If there are approximately 260 weekdays in a year then—allowing for holidays and the occasional frustrating morning of being unable to get a window seat—I figure I must have taken around 1,300 – 1,500 photographs. A selection of eight can be found above.

Nothing lasts forever and demolition of the power station is due to begin in 2020.

‘Homeward Bound’ is an extract of dialogue between two elderly women, overheard on my evening commute while travelling from Manchester Oxford Road to Liverpool Lime Street.

Here, they approach Widnes Station which is near to where I take my daily photograph of Fiddlers Ferry.

One lady was wearing a purple coat and the other wore a green one, so for the purposes of this creative non-fiction piece, I have named them Violet and Olive… 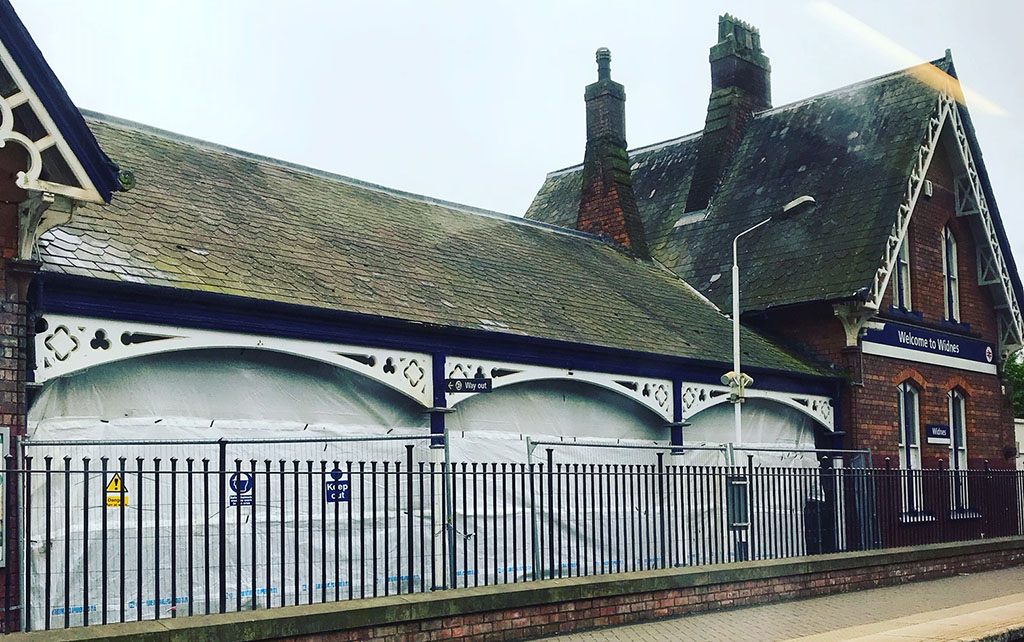 ‘Big power station that. No smoke billowing out though. Maybe they don’t use it anymore.’ Violet mused while pointing out of the window from her table seat.

‘Maybe they switch it on and off.’ Olive said, without really looking out.

‘Doesn’t look like they use it any more,’ Violet said. And then, more hushed, ‘He’s taking pictures of it. On his phone.’

‘At least it’s got green around it.’ Olive offered.

‘I’ve seen it with plumes of smoke billowing out, I’m sure. Or steam.’ Violet said.

There’s a long pause as the train slows and pulls into the station.

‘They had that on a quiz programme,’ Olive, finally looking out of the window, had perked up, ‘Paul Simon wrote what’s it called… Homeward Bound…

“What train station was he waiting at when he wrote it?” They had that as a question.’

‘This one?’ Violet asked.

‘You learn a lot on quiz programmes.’

‘They have to know a lot to go on them,’ Olive was now more animated than Violet, energy levels had passed from aisle seat to window seat, purple coat to green coat. ‘Not just their favourite subject. All of it, before they go on.’

‘That’s where I learnt about the Simon and Garfunkel song. I like their music but I wouldn’t have known that before the quiz programme.’

‘Yes, you can learn a lot about the railways. But these young ones don’t bother anymore. They’ve all got cars now.’ Violet glanced around the carriage.

‘My son wanted to go on one of those quiz programmes but he doesn’t know all the general history. He just knows his subject.’

‘He goes to the pub quizzes, you know, and does all those ones. But he only likes certain rounds. The picture round.’

There’s a pause in the conversation.

Olive resumed, ‘I told him the Paul Simon song was about Widnes Station. But they’ve already asked that one now… On the TV. You need to already know it all for when it comes up.’

‘It’s just common knowledge isn’t it? A lot of it. You know, Stephenson’s Rocket and all that business. That was here as well, wasn’t it?’ said Violet.