‘Minor Modifications’ was originally commissioned for  Re/Place(s) at the Victoria Baths Weekend of Words. Along with five other writers — Sarah-Clare Conlon, Kate Feld, David Gaffney, Joe Stretch and Lara Williams — Phil was invited to write a piece for performance that responded to Manchester’s Water Palace. The Arts Council England-funded event took place on Saturday 8 June 2019.

The story was subsequently published online by The Liminal Residency in August 2019. 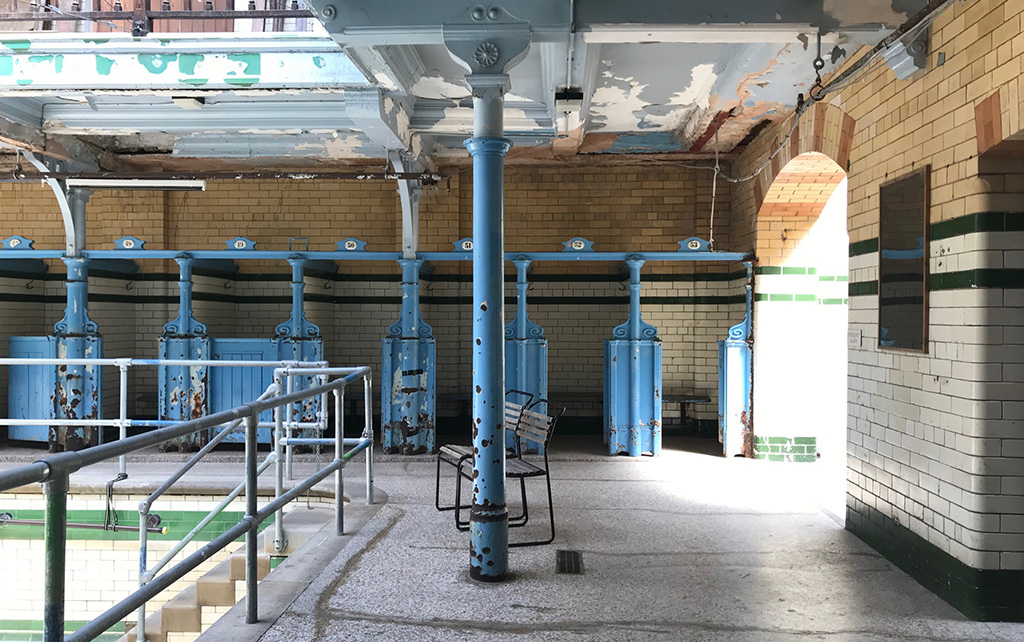 We’d arranged to meet in front of the Whitworth Art Gallery and head onto the baths from there. Being a time before mobiles, the plans had been made on landlines back at our respective houses – of course back then we didn’t call them landlines, we just called them phones. Me in the hall on my parents’ petrol blue Bakelite. Ged in his big sister’s bedroom, using her Garfield phone with the sleepy orange eyelids that open when you pick up the handset.

Ged was approaching from Fallowfield and I was heading up from the Cornerhouse end of Oxford Road. I figured he’d be passing the Toast Rack as I was walking by the BBC. The BBC lettering was still in italics back then. They hadn’t yet rebranded to the smaller, squarer panels that would fail to hide the big diagonal stains left on the concrete by the previous logo. The Mancunian Way still had its phantom limb left-hand turn off to nowhere, where they’d used the wrong piece of Scalextric. Outside All Saints Park, I remember passing a stall that was offering seven fruits for a pound. (I think it’s only five fruits for a pound these days.)

The RNCM still looked like an NCP car park – no glassy façade presenting violin rehearsals to the world, just a series of concrete pillars straddling the pavement. I passed under the University of Manchester bridge and could see the brutalist Maths Tower looming large across the road from the museum.

“Where the hell have you been?” was how Ged greeted me outside the Whitworth.

“It’s a long road. Lot longer than I thought.” I pointed back to illustrate where I’d come from.

“Why didn’t you jump on one of the million buses then?” Ged asked.

“I thought I’d walk it in no time. It’s only one road after all.” It was at this point that I noticed Ged didn’t have his kit bag with him. “We are still going swimming, aren’t we?”

“Yeah, I’ve got my trunks on already. Save a bit of faff getting changed.”

“Well, what about a towel? How you gonna get dry?”

There was me, naively hoping he might bring his sister Liddy along with him, and he hasn’t even brought a kit. “You’re not borrowing my towel, Ged.”

“Fine. I’ll find one. They’ve got all those Punch and Judy changing stalls ’round the pool, haven’t they?”

I needed the loo after my long walk so we popped into the gallery, passing a wall of dimly lit glass cabinets full of textiles with hand-drawn shapes. A Lucienne Day collection display, it said. When I came back out into the foyer, I couldn’t see Ged anywhere, but then came a waving from outside the revolving doors – gesturing for me to get a move on.

“What’s the hurry?” I asked, still doing my fly up.

“Let’s just go already. Spent enough time waiting for you in the first place.” Ged was speed-walking away from Whitworth Park.

On Hathersage Road, I could see the clock tower and the terracotta stripes of Victoria Baths up ahead, once we’d got past the Diabetes Centre that looked like a fire station converted into a post-war Catholic church, or vice versa. Ged was still pacing on in front of me when he started pulling something out from his top.

“What have you got there?” I stuck my arm out to reach for his shoulder.

“Just a towel.” Ged grinned at me as he showed me the balled up yellow and brown fabric covered in hand-drawn diamonds and semi-circles.

“You took that from the gallery? Ged, you can’t—”

“They’re not going to miss one. Cabinet was full of them.”

“Case wasn’t even locked. Can’t be that valuable.”

I remember Ged tried to sneak us into baths the back way – through the laundry room. We scouted around and took turns to peer through the hole in the flaking red door to make sure the coast was clear. The thickness of the wood meant we couldn’t see much from side to side through the hole, but straight ahead looked clear. Just an orange plastic chair in front of a white tiled wall. Light flooded in through the skylight despite it being covered in chicken wire. The laundry room was like a mini swimming baths in its own right, minus the pool in the middle of the floor. Getting into the laundry room wasn’t that tricky, since the hole we’d been staring through turned out to be where the Yale lock used to sit. The hard part was discovering that it was a completely separate building to the baths.

So round to the front we went. Round to the fancy green tiles and the fish mosaics and the ticket window. Ged tried his luck with pulling the brass turnstile towards him, even though there was a woman sitting right there, watching us and waiting for us to pay. There were laminated notices blu-tacked to the glass next to the counter.

“Please show the same respect to the turnstiles that your grandparents would have done. One person at a time.”

“No running, no dive-bombing, no heavy petting. No change for the vending machine.”

I smiled hard at the lady as I paid for us both. Now was not the time to draw attention to Ged and his Whitworth acquisition; his makeshift Modernist towel.

Once into the main pool area, I nervously distanced myself from Ged. He took changing stall 42 and I went a bit further down. Stall 36. I jumped into the cold water and ducked below the surface. Swam almost a whole length under water, sticking closely to the sage green parallel lines along the bottom. I passed stealth-like beneath the muffled sounds of laughter and shouting, beneath kicking legs and wayward floats. I expected to see the stone steps in the corner as I reached the deep end but they were missing. Turned out I was remembering the steps from the pool at the other side of the building. I dived back down and pulled myself along the Deep End wall. The tiles were lighter in the corner – there had once been a set of stone steps there. They’d been removed from the main pool for competition galas. Before my time. The ceramic scar tissue was minimal but it was there if you looked for it. A greyer cream next to the original magnolia tiles. I imagined the water bursting out of the corner where the newer tiles were. Bursting out and pulling us all through the hole in a rush of water. I imagined us all being carried on a chlorinated wave into the laundry room out back – despite already having established that the laundry was a separate building. I imagined the police to be waiting for us there, in wetsuits. I clung to the wall and dragged myself along the diagonal patch of slightly different coloured tiles, where the steps used to be.

When I pulled myself out and sat on the edge of the pool, Ged was nowhere to be seen. I stuck my head behind the red and white striped curtain of stall 42. Empty. I went to 36; my stall. My towel had gone. And there, folded up on the bench above my Reebok Pumps was the Lucienne Day textile. I couldn’t touch it. I pulled my clothes on as quickly as I could, which wasn’t very quickly at all, given that I was still dripping wet. I tried not to drip on the fabric, which proved tricky in the confined space. Then out I rushed, tracksuit bottoms sticking to my legs, T-shirt slapping heavy on my back. My hair was freezing but I had made it outside.

We never actually met up again after that day, Ged and I. Not because of the towel thing, or any falling out, we just drifted. I’d planned to call him later and speak to him on his sister Liddy’s Garfield phone but never did.

I read on my newsfeed recently that there’s a beach in Brittany where pieces of Garfield telephones have been washing up for the past thirty five years. Orange and black striped headless bodies, handsets encrusted with sand and barnacles where the keypad should be, spiral cords intertwined with seaweed, pairs of big round eyes with sleepy eyelids that would open and close when tilted were it not for all the sand that had got in. I pictured Ged’s sister Liddy’s old phone lying somewhere out on the sands of Northern France. But these were unused Garfield phones that had never made it to England. Sporadically spewed out from a crashed shipping container that is still wedged in a cave below the tide. No calls had ever been made on these ones. No arrangements to go swimming, or to meet in front of the Whitworth.