‘Small World’ was originally published online by the University of Aberdeen’s Special Collections Centre as part of Book Week Scotland 2013. 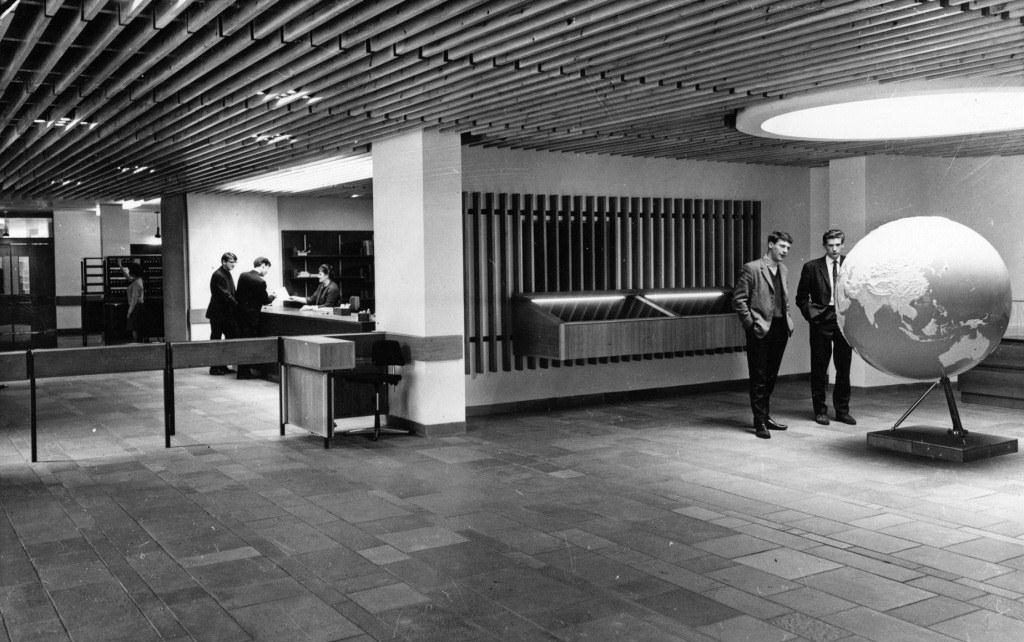 Briefly escaping the hubbub of the business district, the besuited man stood in the quiet of the museum, contemplating a huge monochrome globe. Another smartly dressed man, sporting a ‘Tour Guide’ badge on his lapel, sidled up and joined him above the Americas.

‘One of our most popular exhibits, this…’, came the tour guide’s ice breaker.

‘Small world, Mr McCrae, small world… Much like the rings of a tree show us past trees inside, this is just a younger version of the world we’re standing on… Bored out from inside.’

‘You might laugh, but take us – Human cells entirely regenerate themselves every seven years. Not one part of the you that lives and breathes, came out of your mother.’

‘If this was the actual world from tens of thousands of years ago, wouldn’t the continents still all be joined up? Before the seismic shift of tectonic plates separated them all?’

‘Who said anything about tens of thousands of years ago? This is our world from 1953.’

‘But there are plenty of people alive today who were around in 1953. How could they exist in this world and on that globe.’

‘It’s not a globe, Mr McCrae, please stop calling it a globe. It is the world. Just not one you’re willing to recognise anymore. Black and white too dull for you, is it?

‘Alright then, so when did my dad stop living on that world and move onto this much bigger one?’

‘Always getting bogged down in detail, aren’t we? “How was it dug out? How did we move from one world to another?” It wasn’t an overnight switch, if that’s what you’re wondering. Your father has lived on that world and every other world since. Several decades of worlds that we haven’t yet excavated, either because we don’t have the machinery or we simply lack the museum space to display them. One day we shall have space though, Mr McCrae. And this one right here will be on a keyring in the gift shop.’

A third blazered man appeared and asked Mr McCrae if he was here for the 2pm talk. When he turned to explain that he’d already been filled in plenty by his colleague here, thank you very much; he found himself pointing at thin air. Then, squinting at the globe he spotted the original tour guide, in miniature, talking to someone who looked not unlike his dad.