‘The Haunted Pan’ was originally published online by Coney’s Loft in 2016.

Phil’s performance of it at Leeds Carriageworks won first prize at the Northern Short Story Festival Flash Fiction Slam in 2017. 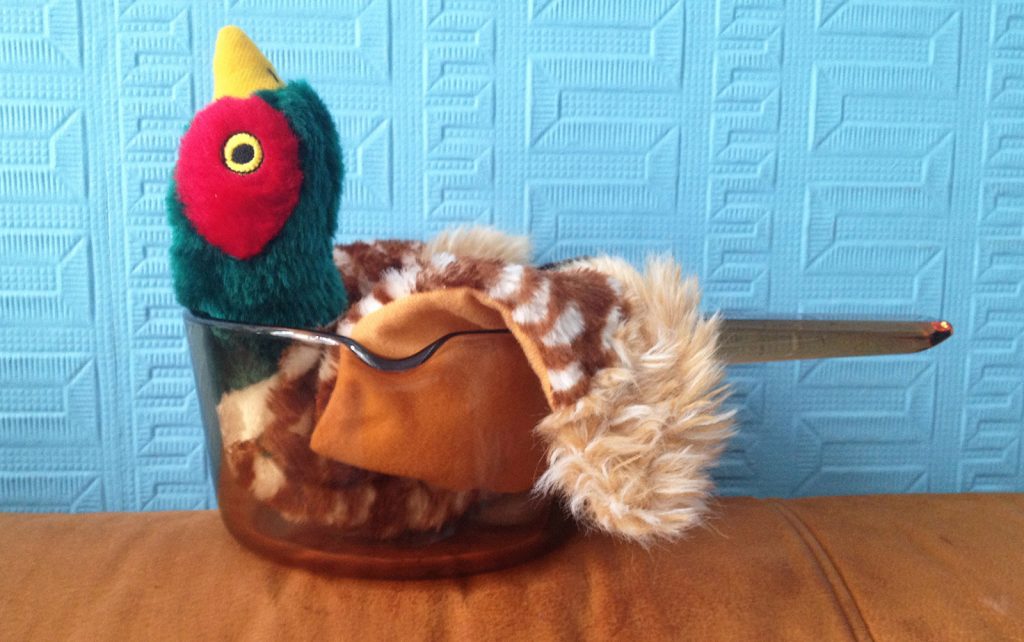 ‘So, have you had any paranormal experiences in this house?’

‘Nope, I’ve not heard a peep from the ghosts in the three years I’ve lived here. I do have a haunted pan though.’

‘Yeah, it’s a glass pan that was here when I moved in. I clean it after use and it comes up sparkling, completely clear. But then it dries filthy.’

‘Hmmm, perhaps that is more to do with your cleaning abilities than any cuisine spectres?’

‘I know what you’re thinking…’

‘But wait, there’s more. Every time I cook food in the pan, it comes out as a fancy Victorian meal with all the trimmings. No matter what I cook. I usually only throw together a simple spag bol, but when I pour it out of the glass pan I get pheasant with all kinds of trimmings. Plus when I’m done eating the pan’s olden days meal, my stomach can walk through walls.’

‘Yeah, that’s the snag. I can jut my belly out and press it through any door or wall, but the rest of me stays solid and gets blocked. So I’ve experimented with it a little and I’ve tried occasionally pouring the food all over me. Rubbing it in my hair, you know? I had it all planned out… I had a mouthful of unswallowed guinea fowl, two fists of sage & onion stuffing, and my cardigan pockets were loaded with carrot & parsnip mash.’

‘The opposite of joy. I’d taken a bit of a run up… You can probably make out where I hit the wall… Just doesn’t come clean. Or rather it does wipe clean quite easily, but then it dries dirty again.’

‘Exactly like the pan. It’s a shame really, ’cause I would have only ever used the power it gave me for good, you know?’

‘There’d be quite a lot of preparation involved before you could go to the rescue of someone who’d, say, locked themselves out of their flat though, wouldn’t there? I mean with the whole having to cook a meal and then all the subsequent distributing of the food about your person… They could probably get a locksmith out in less time.’

‘Hey, maybe that’s it! Maybe the food still has to be piping hot throughout when it comes into contact with the wall. Maybe I’m just taking too long…’

‘And all these clothes piled on the table and the Welsh dresser… Looks like you’ve attempted it a few times. I take it the food washes clean out, but then comes back encrusted into the fabric when the clothes dry?’

‘Pretty much… Say… You guys aren’t really from Most Haunted, are you?’

‘No, Mr Sammons, we’re not really from Most Haunted. We’re from Social Services.’

‘Yeah well, fuck you, you fuckers, I’m gonna run through that wall right now and then you’ll see…’

‘It probably won’t work in front of you… The Victorian meal thing, I mean.’

‘No, Mr Sammons, I imagine it probably won’t.’